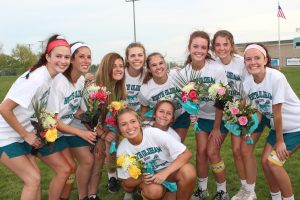 Girls Varsity Lacrosse played their last game on May 5th against South at OC. It was the first game in regionals and the end to their season. The girl’s team will be losing 10 of their seniors this year: Samantha Slaughter, Lexi Havel, Maddie Silverthorn, Helen Clark, Hannah Gross, Madison Thompson, Jenna Burton, Alyssa Gordon, Kate Dunn, and team manager PJ Hamblin. Lexi Havel will be playing at Transylvania University and Helen Clark will be playing at North Central College. Senior night was Tuesday, April 30th where the team had a 17-2 win over Fern Creek.

Jenna Burton feels the worst part of the season was “how fast it went.  It feels like we just started yesterday.” But despite the quick season, it was filled with great memories. Maddie Silverthorn and Hannah Gross said their favorite part were the bus rides.  Helen Clark’s favorite memory was “pre-conditioning last season when the team played freeze tag on Thanksgiving at creasy.”

During this season the varsity team grew closer.  Both Sami Slaughter and Jenna Burton said the best part of the season was the friendships that were made. Hannah Gross believes that this season the team “worked together and had positive results.” Helen Clark thinks that playing lacrosse “has helped me to become for confident.”

For next season’s lacrosse players, Sami Slaughter’s advice is to “trust your team and have each others back.” Jenna Burton suggest to “play like a family”. Maddie Silverthorn’s words of wisdom are to “never give up”.  To improve Lexi Havel and Hannah Gross suggest playing club lacrosse.

Congratulations to the North Oldham Varsity Lacrosse team on another season! Good luck next year!

No Events This Week

Events are added by athletic staff.
View All Events