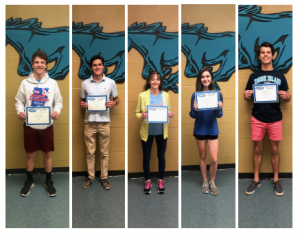 Bryce Moberly is a junior at North.  He has run cross country and track for two years, and has been wrestling for six years. He says his favorite sport is cross country.  When Moberly isn’t at practice or a meet, he does his homework and hangs out with his friends. His most influential coach was his previous wrestling coach, Coach Zeppa. Moberly currently has no plans to continue his sports after college. He says that transiting between sports has gotten easy because he just goes from one season to the next. In each sport you are surrounded with different teammates but Moberly says, “it’s pretty much the same in my opinion because the camaraderie of sports in general is pretty much the same from sport to sport.”

Christian Sanders is also a Junior at North.  He runs cross country, runs track and swims.  Sanders got an early start on his sports. He has been running since the second grade and started swimming lessons when he was really young. However, he didn’t start track until his Freshman year. His favorite sport is Cross Country. When he isn’t playing sports, he rests, sleeps, and does his homework. Sanders does not have any plans to continue his sports into college. With teams dynamics changing between seasons and years Sanders says there is, “more pressure when you get older because you have to be a senior and lead the team and set the example.”

Skylyn Goldberg is a junior at North. She runs cross country, runs track, and swims. Her favorite sport is cross country. Goldberg has been running cross country since ninth grade, but she says she has been running for a long time. She has also been swimming since she was six or seven. She thinks that she definitely wants to continue running and swimming after high school. According to Goldberg, her cross country team is a very close team and swimming is similar. She say track is a little bit different because it is more individual, however, you still get to hang out with the team. Playing three sports back to back seems very taxing but Goldberg says, “it’s not that hard because my parents give me a week break since I do three sports.”

Samantha Say is a freshman at North. She is on the dance team, runs cross country and runs track. Her favorite sport is Track. Say has ran cross country and track for two years, and dance for one year.  When she doesn’t have practice she hangs out with her friends or spends time at home with her family. Say says her most influential coach is her coach from eighth grade Coach Taylor. Say hasn’t been switching between seasons for as long but she says, “it was harder for me when I did cross country and dance because the seasons started to overlap at the end of it but it kind of evened out and it was pretty easy.”

Marshall Royce is a senior at North. He wrestles, runs cross country and runs track. He also plays lacrosse in the spring.  His favorite sport is Cross Country, even though he has been wrestling since the 5th grade. Like, Moberly, his most influential coach was his previous wrestling coach, Coach Zeppa. Next year, Marshall will be playing lacrosse for the club team at the University of Kentucky. Doing four sports in a year can be challenging but Royce says, “Since I am a senior, I have been doing it [transiting between sports] for a while. It has gone pretty smoothly each time, you just take a one or two week break in between and just go right into it.”

Congratulations to all five Mustangs!