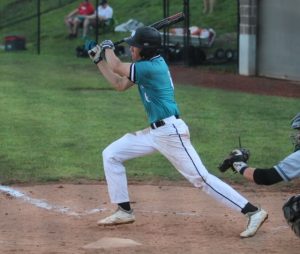 On May 28th, the Mustangs Baseball team won the regional title for the first time since 2012. NOHS defeated Shelby county 12-8. The team also set a program record with 32 wins.

“We have had to overcome some big injuries this year to the team.” says Nick Rose. Those injuries included Chris Jackel tearing his MCL, Atkins going through surgery and others who were out for various reasons.  Despite all the injuries, the baseball team has stayed positive and fought the whole season in and out of the dugout. Brain Uberti shared that, “The dugout does whatever we can to stay positive, up, loud, and keeping the charts.”

The team is very close because as Rose shared “We have has been playing together since 6th grade.” The coaches have also played a large role in the team’s success. Noah Godfrey feels “The coaches are all very positive and they believe in us and we put trust in them that they make the right choices.” Jay Smith also credits their success to their team motto for the year “We>Me”, he said “I think this is an important factor in our success this year.”

As far as heading to State, Brendan McAfee says that “We are taking it one game at a time. We have the ability to win games. We just need to come focused and ready to play.” “The team is ready to do just that”, Tristan Kellogg stated,  and continued how the team is “Very supportive of each other no matter their mistakes”. Kellogg finished with “We all have each other’s back so if someone messes up they automatically know no one is going to to hop on them about that, we just encourage them and keep it positive.” Atkins agrees. “Our team is really like family. We have 9 seniors who’ve been playing together since we were 11 years old so we really know each other well.”

The Mustangs will take on Trinity High School at Eastern High School on Saturday evening with the first pitch at 7:00 pm. The first 60 NOHS students at the game will receive a free Regional Champion tee-shirt. So come on out and support your North Oldham Mustangs at the Semi-State game! Good luck to the boys baseball team on their path to State!