The North Oldham girl’s tennis team competed in the KHSAA State Tournament last week and finished their season ranked 2nd in the state equaling their best mark in school history. 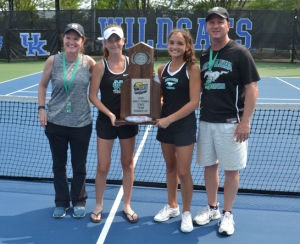 In the KHSAA State Tournament, each individual match win counts as one point towards the team’s final ranking.

In singles, Emma Beavin lost one game over her first three matches which included a win over the #9 seed.  In her quarterfinal match, she played the #1 seed and lost.  The #1 seed eventually won the tournament.  Katie Beavin was equally as dominant in her first three matches also losing only one game.  In her quarterfinal match, Katie played the #2 seed, also from Sacred Heart, and lost the match.  The #2 seed lost in the semi-finals to the eventual runner-up. 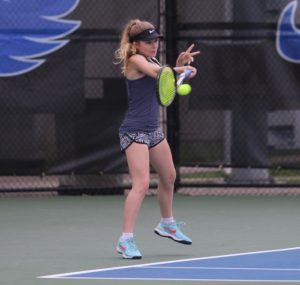 Sophomores and twin sisters, the Beavins will remain key players for the girl’s team over the next two years.  Both Emma and Katie were named to the All-Area Louisville and KHSTCA All-State teams this year.

In doubles, Jenny Stekardis and Lilah Shallcross won their first two matches 6-0, 6-1 and 6-0, 6-4.  In the round of 16, they lost to the #2 seed and eventual champion from Ryle HS.  Senior Stekardis leaves North Oldham with making the round of 16 in doubles twice. In addition, she was named to the All-Area Louisville and KHSTCA All-State teams.  7th grader Shallcross has a promising career ahead of her and will be a key player for years to come.  Lilah was named to the All-Area Louisville team this year.

8th grader Mangan has already reached the round of 16 and finals in her two years playing doubles in the program.  Mangan earned both All-Area Louisville and KHSTCA All-State honors this year.

7th grader Renton will have five more years in the program and earned both All-Area Louisville and KHSTCA All-State honors in her first year playing varsity tennis. 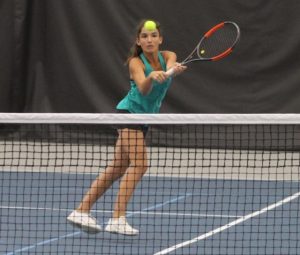