North Oldham volleyball wouldn’t go down without a fight. 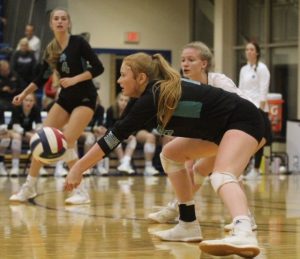 North Oldham’s Addison Foote moves toward the ball in the first set of the state semi-finals against Mercy.

“That’s who they are, they are fighters and they are going to go down fighting tooth-and-nail,” Gamsky said. “I was so proud to see them comeback after being down 0-2.”

After Mercy won the first three points of the opening set, Addison Foote had a block and kill for consecutive points.

Mercy took five of the next seven points until Emily Goddin had a kill on an assist from Brie Postema. North Oldham’s serve receive struggled as Mercy took control midway through the set.

“We were just emotional, intense and nervous,” Gamsky said. “A lot of our serve receive was out of whack, our defense. Mercy runs a super-fast offense.”

Gamsky was forced to call a timeout following a 3-0 Mercy run that extended its advantage to 16-8. Hannah McGill and Foote briefly stopped the run with back-to-back kills, but Mercy finished off the first set.

Mercy captured four of the first five points in the second set. North Oldham closed within three twice on kills by Foote and Postema, but Mercy extended its advantage to 17-10.

Goddin had a kill to cut North Oldham’s deficit to 21-13, but Mercy finished the set by taking four of the final seven points.

“We were on our heels in the first two sets, letting them take control,” Gamsky said.

North Oldham won the first four points of the third set, including kills by McGill and Foote. The Lady Mustangs took seven of the opening nine points.

Morgan Rutledge had an ace for Mercy to even the set at 8-8 to cap a 5-0 run. North Oldham answered as Jordan Atchison and McGill had kills to give North Oldham an 11-9 advantage.

North Oldham retook the lead, 20-19, on a 4-0 run completed by an ace from Postema. Mercy answered with two straight points, forcing a North Oldham timeout.

Postema found Ryan Bucher for a kill to retie the set. A kill by Foote gave North Oldham a 23-22 advantage.

After North Oldham came within set point at 24-22, Mercy had back-to-back points. A service error and kill by Foote gave North Oldham the third set.

North Oldham won seven of the opening 10 points in the fourth set, capped by a kill from Goddin to force a Mercy timeout. North Oldham’s offense functioned more efficiently in the third and fourth set as Postema distributed to find open spots on the floor.

“We talked to her [Postema] about running the offense where a lot of the hitters could get one-on-one because ultimately other people are pulling the block,” Gamsky said. “She was running different things.”

An ace by Postema gave North Oldham a 10-6 advantage. North Oldham took a 15-9 lead on a kill from Foote, which was followed by an ace from Bucher.

Mercy called a timeout after North Oldham took a five consecutive points for an 18-9 lead. A kill by Atchison followed by an ace from Brooke Bennett extended North Oldham’s advantage to 22-12.

Mercy won the first three points in the final set, but McGill ended the run with consecutive kills. A kill by Foote gave North Oldham a 5-4 advantage.

North Oldham took a 9-7 lead on a service error, but Mercy evened the score with two straight points. With the teams tied 10-10, Mercy won two points to take control of the final set.

After a service error, Mercy won the next three points to end the match.

North Oldham finished the season at 28-9 and the top public school in the state. Way to go Mustangs!