Article and Photos By Sam Draut 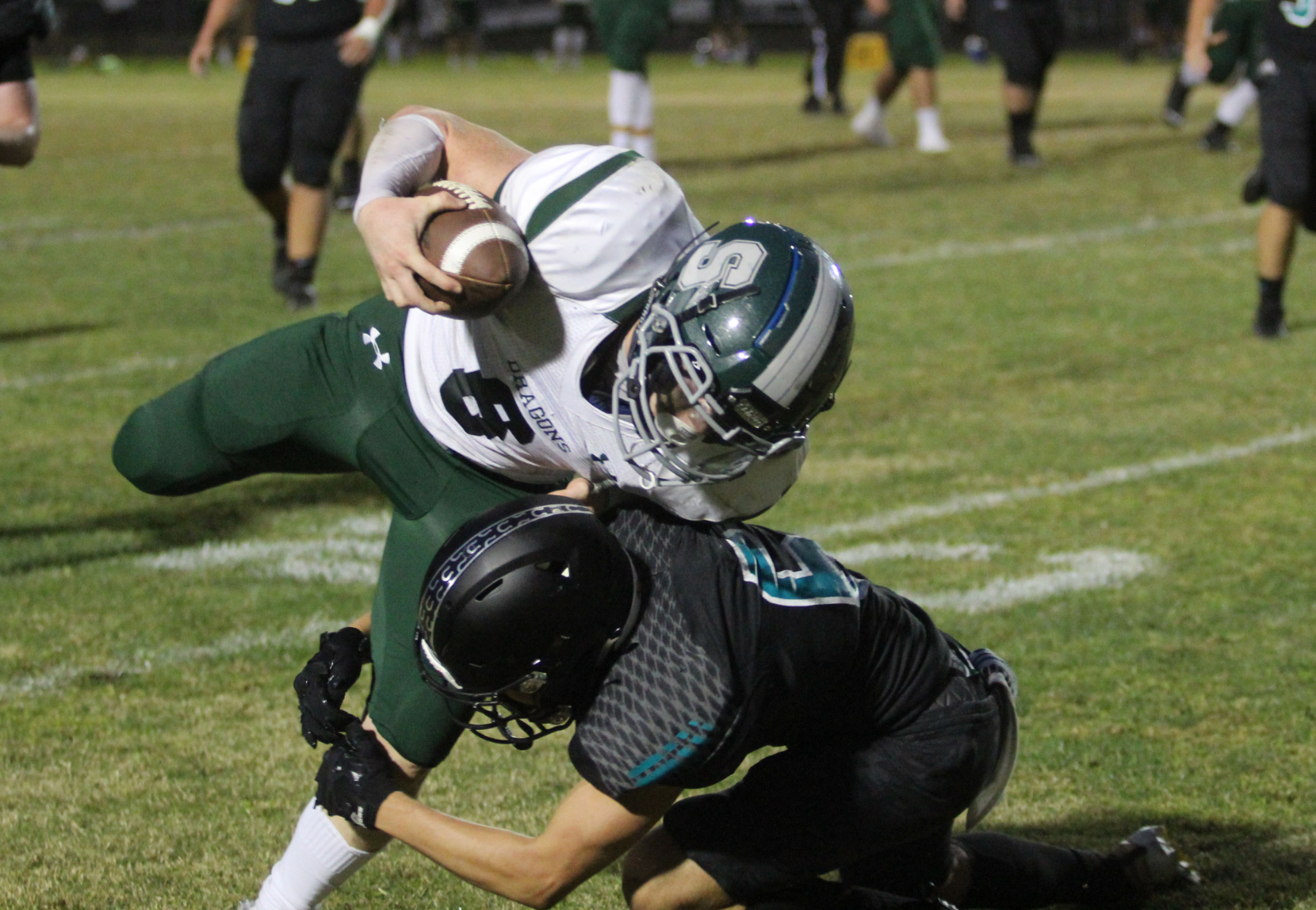 After a comeback victory against Oldham County last week, South Oldham’s 10th straight win in the rivalry, the Dragons turned their attention to North Oldham with less than 48 hours before kickoff.

South Oldham was scheduled to play Jeffersontown (J’town) while North Oldham was slated to host Waggener, but the Louisville teams were forced to reschedule due to ongoing protests surrounding the death of Breonna Taylor.

South Oldham scored the game’s final 19 points after North Oldham rallied from a 28-7 lead to close its deficit to a touchdown in the second half. The Dragons extended their winning streak against North Oldham to six games with the victory.

“Every day the goal is to win the county ever since I got here,” South Oldham coach Jamie Reed said. “That has always been a goal, those teams are really good at OC and North.”

Falling behind by three touchdowns before rallying to a one-possession deficit, North Oldham coach Joe Gamsky was proud of the toughness his team showed.

“Our kids battled, that’s one thing about this group,” Gamsky said. “They don’t quit, they don’t stop.”

South Oldham’s first two drives ended in three-and-outs while North Oldham lost a fumble and an errant snap on a fourth-down play.

Following the turnover on downs, South Oldham capitalized on its ensuing drive that started on the 15-yard-line. Kayden Anderson had a 13-yard reception on a throw from Alex Brown and Ethan Snider scored one play later.

After the South Oldham touchdown, Austin Gibson broke free down the sideline for a 32-yard gain. Nate Garrison slowed the North Oldham drive with a tackle for a loss that was followed by a fumble on the next play. 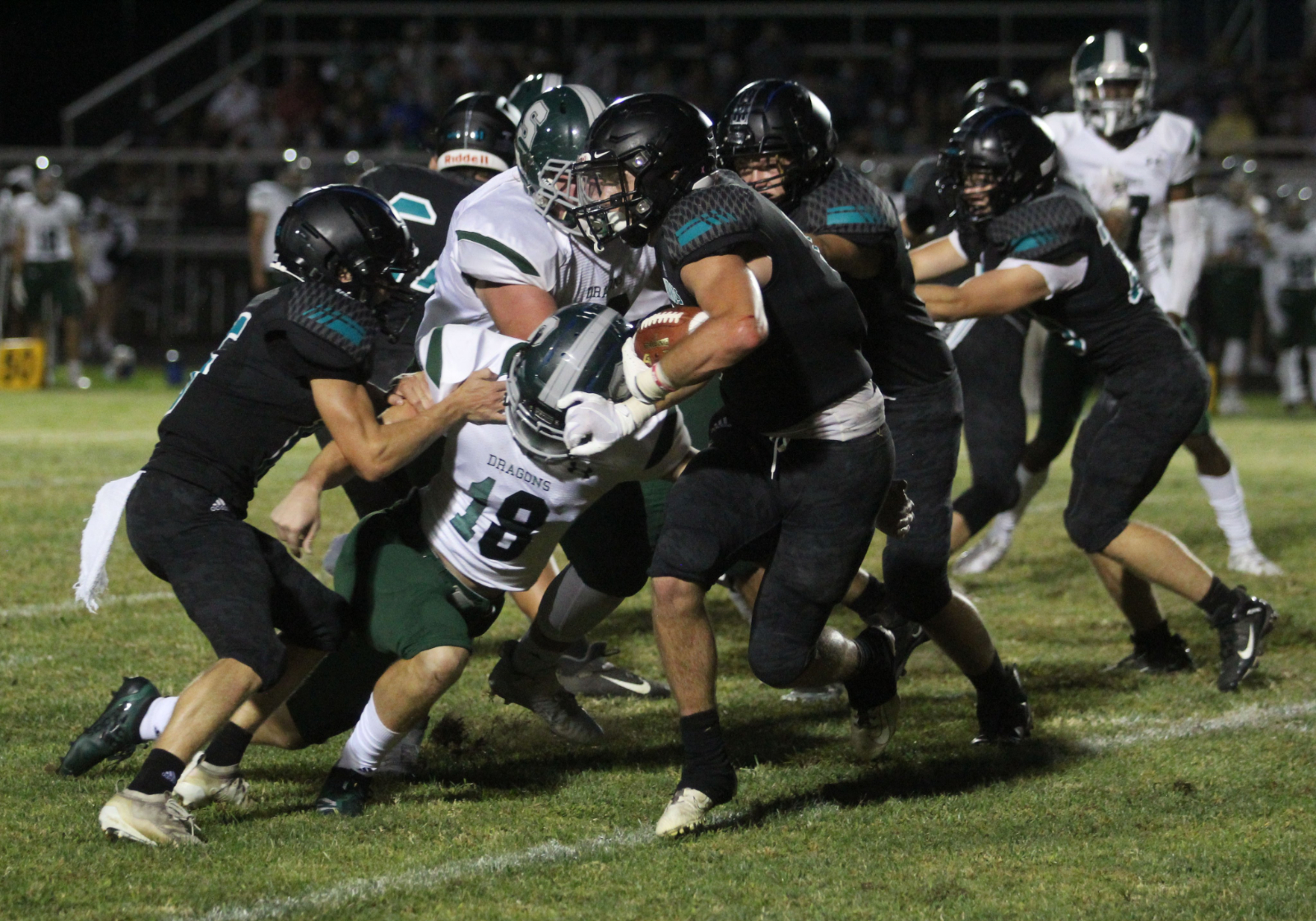 South Oldham extended its lead to 14-0 on its next drive as Kyle Smythe scored from eight yards to cap a 55-yard drive.

Gibson had a 20-yard run on North Oldham’s next possession, but the drive ended as Dragon linebacker Austin Covington had a tackle for a loss on third down.

South Oldham fumbled after the change of possession, but North Oldham returned the ball right back as Kellen McGee intercepted a throw on the next play.

The Dragons capitalized on the turnover. Snider had a 17-yard run and McGee had a 20-yard reception on a drive that ended on a 15-yard touchdown run by Luke Oliveros for a 21-0 lead with 8:21 left in the second quarter.

Gibson took a handoff up field and down the sideline for a 65-yard touchdown for the Mustangs’ first score.

“He [Gibson] is showing against really good competition that he can play at a high-level, that he can be a playmaker and a game-changer,” Gamsky said.

Brown started South Oldham’s next drive with a 12-yard pass to Snider. The quarterback found Snider again for an 18-yard reception on a fourth-and-5. South Oldham scored three plays later on a touchdown run by Anderson.

The Mustangs’ final drive of the first half gave them momentum heading into halftime.

Blake Wetzel started the possession with a 15-yard reception. Freeland connected with Liam Hutson for a 57-yard touchdown to cut North Oldham’s deficit to 28-14.

“I think we have some special athletes, with our scheme, people are going to key on Gibby [Gibson], so it’s going to open it up for some others,” Gamsky said.

Midway through the third quarter, South Oldham threatened with drive that pushed into the red zone, but Gibson made a play to bring North Oldham even closer.

The linebacker intercepted a throw on the boundary and returned the ball 97 yards for a touchdown. Gibson’s pick-six closed North Oldham’s deficit to 28-21 with 6:09 left in the third quarter.

“He [Gibson] is a great leader,” Gamsky said. “We are looking for somebody to be special and he is able to do it when we need it.”

North Oldham forced a stop on South Oldham’s next possession, setting up a potential game-tying drive.

The Mustangs crossed midfield, but the Dragons’ defense held firm, forcing an incomplete pass on fourth-and-1 from the 39-yard-line.

“We have to trust in our guys that everybody does their job,” Garrison said. “We got it done.”

With a touchdown-lead, South Oldham added to its advantage.

The Dragons picked up several first downs as it burned time off the clock midway through the fourth quarter.

McGee caught a 15-yard touchdown in the corner of the end zone from Brown on third down to give South Oldham a 34-21 advantage with 7:16 left.

“It’s always open, I made sure I got passed the goal line so I’d get in,” McGee said. “It was a good ball by Alex.”

North Oldham had a sustained drive that moved inside of the 10-yard-line with less than three minutes left. The possession ended on an incomplete pass on fourth-and-goal from the 9-yard-line.

After the change of possession, South Oldham scored in two plays. Snider rushed for 36 yards to bring the ball midfield. Jeffery Burton closed out the game with a 53-yard touchdown run to extend South Oldham’s lead to 41-21.

“We got back to basics, we get a lead and then you start tampering with some other stuff,” Reed said. “Once things started going bad, we went back to the basics.”

Covington returned an interception for a touchdown, going 52 yards for a score with 1:38 left.

“I dropped back into my zone and I was in the perfect place at the perfect time,” Covington said. “I had really good blocks and read the blocks.”