The North Oldham boys and girls basketball seasons got underway Saturday evening not with a jump ball, but a coin toss. Just like with so many things in 2020-2021, unforeseen changes have occurred to make sure the games are played safely. The girls team was supposed to play at Shelby County at 1:30 pm but due to a covid connection with the Mustang opponent, they were forced to find another game in less than 24 hours. The girls team traveled to Lexington to take on a tough Lexington Catholic team. The Mustangs jumped out to an early 1st quarter lead 20-19. In the second quarter the Mustangs were only able to muster seven points, while the Lex Catholic Knights used a 13-0 run to forge ahead 44-27 at that half. In the third quarter, the Knights continued the control the pace outscoring the Mustangs 19-15 ending the quarter up 63-42. North Oldham continued to fight winning the final quarter 18-17, but it was not enough as Lexington Catholic prevailed 80-60. Leading the way for the Mustangs was Riley Neal with 29 points and 9 rebounds. The Vize sisters combined for 21 points, Katelyn with 13 and Kylie with 8. Kelsey Lubker chipped in with 6 points to round out the scorning.

The girls team next takes on Fort Thomas Highlands high school at home this Tuesday evening with the coin toss at 7:00 pm. 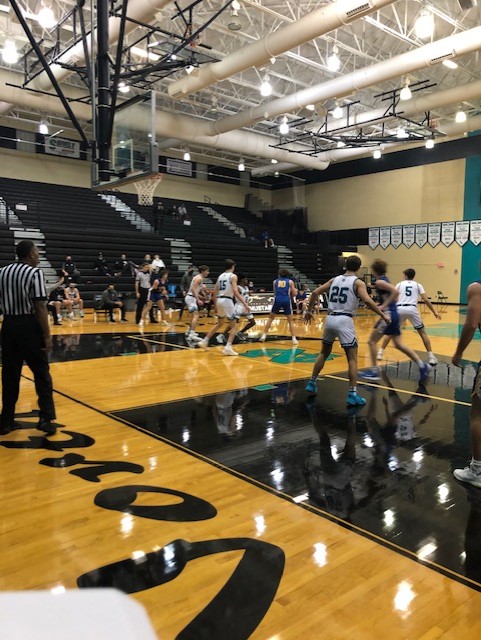 The North Oldham boys team took on Trimble County at North Oldham. The Mustangs came out pressing and worked to attack the rim often with a quicker and taller line up looking to shake off the rust of many weeks of practice uncommon to any other season. The Raider defense was unable to handle the scoring  of the Mustangs with North Oldham taking a 56-35 halftime lead. The second half was just a frenetic with teams trading baskets as the Mustangs maintained a solid twenty point cushion throughout the third and final quarters. When the horn sounded on the first game of the new season the Mustangs found themselves with a 100-80 victory. Dallas Roberts led the Mustangs with 28 points and 2 steals, Caleb Hawley scored 20 and grabbed 9 rebounds, and Austin Carr-Cole chipped in with 16 points.

The Mustangs next play on Tuesday night at Jeffersonville, IN, with the “tip off” – Indiana rules, at 7:30 pm.